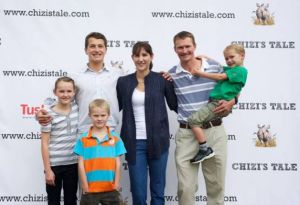 Greenwich’s Jack Jones poses with the family, the Wenham’s, who inspired his book “Chizi’s Tale.”

We are delighted to share this wonderful piece from GreenwichTime.com featuring Jack Jones on the importance of saving black rhinos from extinction and the need for continued education.

An excerpt from the article “Rallying for rhinos: Young author pens tale of survival and hope”

As Jack Jones worked to bring his first book from concept to creation, it was the impending destruction of a species a world away that kept him on task.

Like the world’s four other species of rhinoceros, black rhinos are under intense pressure to survive, considering the high demand in some world markets for their horns, which are thought to carry medicinal powers. The rate of poaching in recent years has ratcheted up the alarm. In South Africa, government officials estimated that more than 1,000 rhinos were poached last year, up from about 600 in 2012. “They could be extinct in our lifetime, if we don’t address the problem of poaching,” said Jones, 17, a lifelong Greenwich resident who is a senior at Brunswick School. “That is why I decided to really focus on this book as a means of addressing that problem.”

Last spring, Jones set out (with help from illustrator Jacqui Taylor) to share the true story of Chizi, a baby black rhino who lost his way one day in August 2013 on the plains of the Malilangwe Reserve in Zimbabwe. Jones hoped others would be as inspired as he was by the Wenham family, who took the animal into their home and hearts. The end result is Chizi’s Tale (Keras, $16.99), which was released last month.  (READ MORE.)

View all posts by chiziadmin →