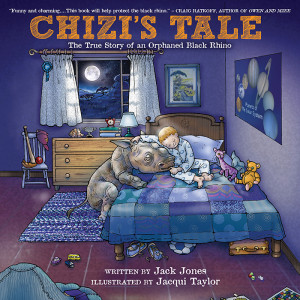 Calling all parents, teachers and counselors—we’re on a mission to help save the black rhino and we hope you’ll join us!

Chizi’s Tale: The True Story of an Orphaned Black Rhino, written by high schooler Jack Jones and illustrated by Jacqui Taylor, tells the story of two park rangers in Zimbabwe who found an abandoned baby black rhino. They called the local park manager who, knowing the baby rhino would not survive alone, took him home and named him Chizi. Chizi still lives with the park manager and his family and when he’s mature enough, he will be released back into the wild.

Black rhinos are critically endangered. Saving Chizi and helping him return to his natural habitat is vital to helping his species survive.  Author Jack Jones has partnered with Tusk USA and is donating 100% of the proceeds from the sale of Chizi’s Tale to Tusk USA to help save black rhinos. But if conservation efforts are to succeed, it is imperative that education be promoted at an early age. To that end, we’ve put together a very special Chizi’s Tale Fun Pack Activity Kit—and invite you to share Chizi’s Tale whenever—and wherever—you can. Click here to download your Fun Pack today!

View all posts by chiziadmin →